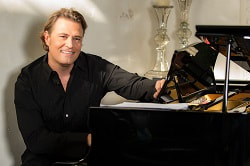 Gold Circle (1st 3 rows): $49  All Other Seats: $39
​Reserved Seating
Presented by: Licata/Cardinale Productions
​This is a Community Rental
About Pasquale Esposito

Pasquale Esposito, born and raised in Naples, Italy immigrated to the United States to pursue his passion for music in 1998.  He graduated from San Jose State University’s School of Music in 2009 and has released 7 full length CDs.  He is an international touring and recording artist and has most recently been seen across the United States with his two PBS Specials: “Celebrating Enrico Caruso” (2015) and “Celebrating Italian Piazzas” (2018).  He made his successful opera debut with San Francisco Opera in 2015 in the world premiere of “Two Women.” He is presently in the production phase of his next TV Special and album titled “ Celebrating the Spirit of Christmas” (2020).

Pasquale Esposito makes his first appearance in East Contra Costa County at El Campanil Theatre. Noted for the raw power and beauty of his voice, Naples-born tenor Pasquale Esposito is famed for his pop-opera style and stirring tributes to legendary opera singer Enrico Caruso and the Italian Piazzas on PBS and as part of a blockbuster live national tour. This concert is set to feature an entertaining mix of original compositions, Broadway favorites, Italian, American and Spanish songbook standards, and of course, some opera highlights.
​
About The Anthony "Nino" Lane Band

Anthony "Nino" Lane was born as Antonino Pasquale Cotroneo in Hamilton, Ontario, Canada.  Son of Giorgio Cotroneo of San Roberto, Reggio Di Calabria and Angelina Musitano of Delianuova, Reggio Di Calabria.  At the young age of ten Nino began to perform with many bands in the Italian community.  Singing mainly in Italian he was known as “the little Italian Singer”   While in the Harmony Dance band he was fortunate to open up for the Original "Ink Spots " and many other Nationally known headliners.   At the Age of fourteen he decided to leave the Italian sound and  teamed up with his brother Frankie and began their first rock Band "Double Vision" later to be called "Clear Cut" they went on to record three albums.  The first one under A&M records produced by Daniel Lanios (U-2, Peter Gabriel, Bonnie Raitt).  The second recorded under the CBS label, produced by Bob Destocki (Fast Times at Ridgemont High, The Ides of March” and the final one on their own Lane Brothers Label.
​
Anthony follows his heart and sings the music he enjoyed growing up - Classic Italian.  Anthony “Nino” Lane Cotroneo and his amazing band perform regularly at Italian events all across the Country.