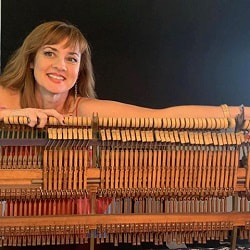 An intimate Cabaret-style Piano/Vocal Tribute to the Grammy Award-winning songstress featuring such enduring hits as Close To You, We’ve Only Just Begun, Rainy Days and Mondays…and many more favorites.

Karen Carpenter was one half of the legendary brother and sister group, The Carpenters. Her singing attracted critical praise and influenced generations of significant musicians and performers who followed her including Madonna, Sheryl Crow, Shania Twain and K.D. Lang.  Paul McCartney said she had “the best female voice in the world: Melodic, Tuneful and distinctive.”  Elton John called her “one of the greatest voices of our lifetime.”
​
On October 12, 1983, shortly after her death, The Carpenters received a Star on The Hollywood Walk of Fame. In 1999, VH1 ranked Karen at #29 on its list of the 100 Greatest Women of Rock and Roll.  In 2010, Rolling Stone ranked her #94 on its list of the 100 Greatest Singers of All Time, calling her voice “impossibly lush and almost shockingly intimate.”
She left a treasure of memorable songs, and an endlessly enduring legacy.


Katy Stephan is a popular performer at El Campanil Theatre having appeared numerous times previously with Branden & James, and Hadleigh Adams, and in her own “Mancini” program last season.

She has performed internationally in Germany, France, Italy, Brazil, Japan, Cyprus, the U.K. and throughout the U.S. and the Bay Area.  She is the solo singing voice on the title theme to the ABC sitcom, Hot Properties, and is heard on many other films and series including Catwoman; Dreamworks’ Time Machine, and the SciFi Channel’s EarthSea.

Also a composer and actress, she has performed at Carnegie Hall and as a soloist with Oakland East Bay Symphony, and won a Bay Area Critics Circle Award for her role of Luisa in the musical, The Fantasticks at SF Playhouse.